Signed By:
By   Jim Gaffigan

This Hardcover First Edition of Food: A Love Story has been personally Autographed by Jim Gaffigan. Exclusively Made Available at PremiereCollectibles.com. 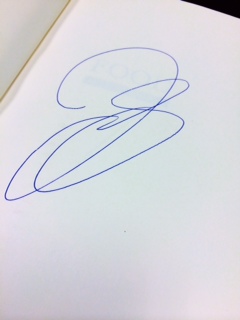 “What are my qualifications to write this book? None really. So why should you read it? Here’s why: I’m a little fat. If a thin guy were to write about a love of food and eating I’d highly recommend that you do not read his book.”

Bacon. McDonalds. Cinnabon. Hot Pockets. Kale. Stand-up comedian and author Jim Gaffigan has made his career rhapsodizing over the most treasured dishes of the American diet (“choking on bacon is like getting murdered by your lover”) and decrying the worst offenders (“kale is the early morning of foods”). Fans flocked to his New York Times bestselling book Dad is Fat to hear him riff on fatherhood but now, in his second book, he will give them what they really crave—hundreds of pages of his thoughts on all things culinary(ish). Insights such as: why he believes coconut water was invented to get people to stop drinking coconut water, why pretzel bread is #3 on his most important inventions of humankind (behind the wheel and the computer), and the answer to the age-old question “which animal is more delicious: the pig, the cow, or the bacon cheeseburger?”

JIM GAFFIGAN is a Grammy nominated Comedian, New York Times Best Selling author, top touring performer, and multi-platinum selling father of five. In May of 2013, Jim's first book 'Dad is Fat' was released by Crown Publishing debuting on the New York Times bestsellers list at #5 and remained in the top 20 for 17 weeks. His second book Food: A Love Story will be released on October 21, 2014 under the same imprint. His fourth hour-long special "Obsessed" premiered on Comedy Central on April 27th, 2014 becoming the most-watched stand-up special since April 2013. The album, by the same title, debuted at #11 on the Billboard Top 200, and charted #1 on iTunes giving Gaffigan four albums in the Top 10 Comedy Albums on iTunes. At the 2014 American Comedy Awards he was awarded Best Concert Comedian. Gaffigan lives in New York City with his wife Jeannie and their five children.