Signed By: By   Sherrilyn Kenyon

This Hardcover First Edition of Illusion has been personally Autographed by Sherrilyn Kenyon. Exclusively Made Available at PremiereCollectibles.com. 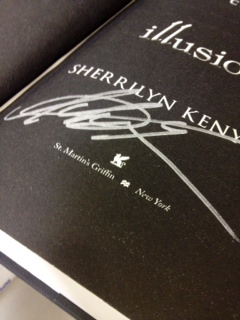 Be careful what you wish for . . . You just might get it.

Nick Gautier is tired of his destiny. He doesn’t want to be the son of a demon who’s fated to end the world. Nor does he want to see another demon or other preternatural creature who wants to kill or enslave him. He just wants to be normal and have normal problems like everyone else.

But normality isn’t all it’s cracked up to be. When he gets sucked into an alternate reality where his mother has married his mentor and his Atlantean god best friend has become a human geek, he begins to understand that no life is free of pain, and that every person has a specific place in the universe . . . Even the son of a hated demon. Most of all, he sees that his powers aren’t the curse he thought they were, and that the world needs a champion, especially one its enemies can’t imagine rising up to defend the ones he should destroy.

Old enemies and new friends square off for a major battle that will either restore Nick to his real world, or end him forever in #1 bestselling author Sherrilyn Kenyon’s fifth novel in The Chronicles of Nickseries, Illusion.

The #1 New York Times bestselling author, Sherrilyn Kenyon, who is proud of her mixed Cherokee heritage, lives a life of extraordinary danger... as does any woman with three sons, a husband, a menagerie of pets and a collection of swords that all of the above have a major fixation with. But when not running interference (or dashing off to the emergency room), she's found chained to her computer where she likes to play with all her imaginary friends. With more than thirty million copies of her books in print, in over one hundred countries, she certainly has a lot of friends to play with too.

Her books appear regularly at the coveted #1 bestselling spot. This extraordinary bestseller continues to top every genre she writes. Her current series include: The Dark-Hunters, The League, Chronicles of Nick and Beladors. Since 2004, she has placed more than 80 novels on the New York Times list in all formats including manga.