Signed By:
By   Billy Ray Cyrus

This Autographed, Hardcover, First Edition of Hillbilly Heart has been personally Autographed by Billy Ray Cyrus. Exclusively Made Available at PremiereCollectibles.com. 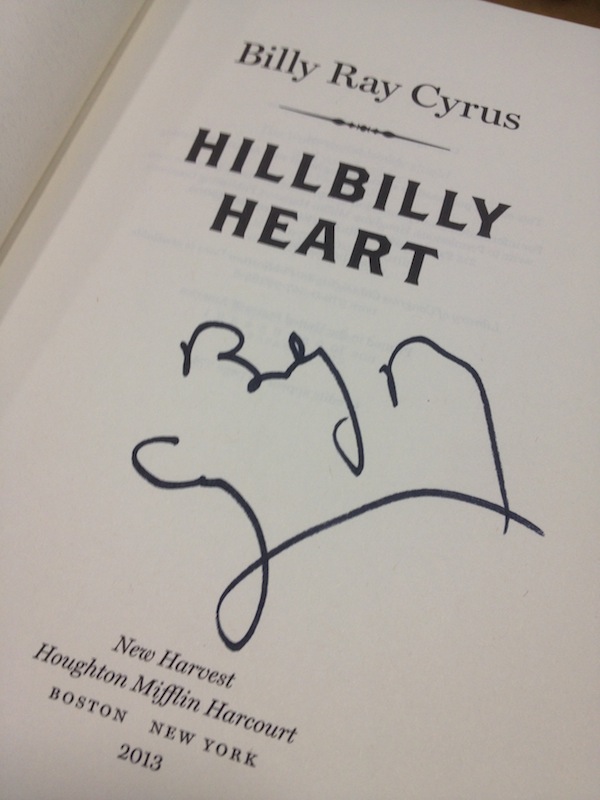 Billy Ray Cyrus is an award-winning country music legend whose “Achy Breaky Heart” propelled his debut album, “Some Gave All,” to the top of the charts for a record-breaking seventeen weeks. He’s also father of Miley Cyrus, one of Hollywood’s most successful young stars, who grew up on stage and on screen, most famously as the lead on the Disney Channel’s “Hannah Montana,” where Billy Ray Cyrus played her father. But sometimes the truth is even better than fiction. Now, for the first time, fans can read about Cyrus’s tenacious and inspiring struggle to find his own way to faith, family, and the power of music.

Hillbilly Heart opens during Cyrus’s turbulent childhood in Kentucky, where he sought refuge in music and sports after his parents’ divorce. He was a troublemaker in training, known more for pulling pranks than for following in his preacher grandfather’s much-vaunted footsteps. But when he heard a voice telling him to get a left-handed guitar and start a band, this rebel found his cause. Ten years later, after tirelessly working the club circuit and knocking on the closed doors of music executives from Nashville to Los Angeles, Cyrus finally made a stratospheric breakthrough, becoming a multi-platinum selling artist and taking his rock-and-roll twist on country music to the world’s stage.

Cyrus fans have always been able to piece together the details of his life through his lyrics—the ups and downs, adventures and disappointments—but Hillbilly Heart gives them a front row seat for his most candid performance ever.

Hailing from small-town Kentucky, Billy Ray Cyrus is an American country music singer/songwriter who helped to make country music an international sensation. His album Some Gave All has sold over 20 million copies worldwide and is the best-selling debut album of all time for a solo male artist. In addition to his music career, Cyrus starred in the TV series Doc from 2001 to 2004 and co-starred in the Disney Channel series Hannah Montana with his daughter Miley Cyrus.