Signed By: By   Oliver North

This Edition of Heroes Proved has been personally Autographed by Oliver North. Exclusively Made Available at PremiereCollectibles.com. 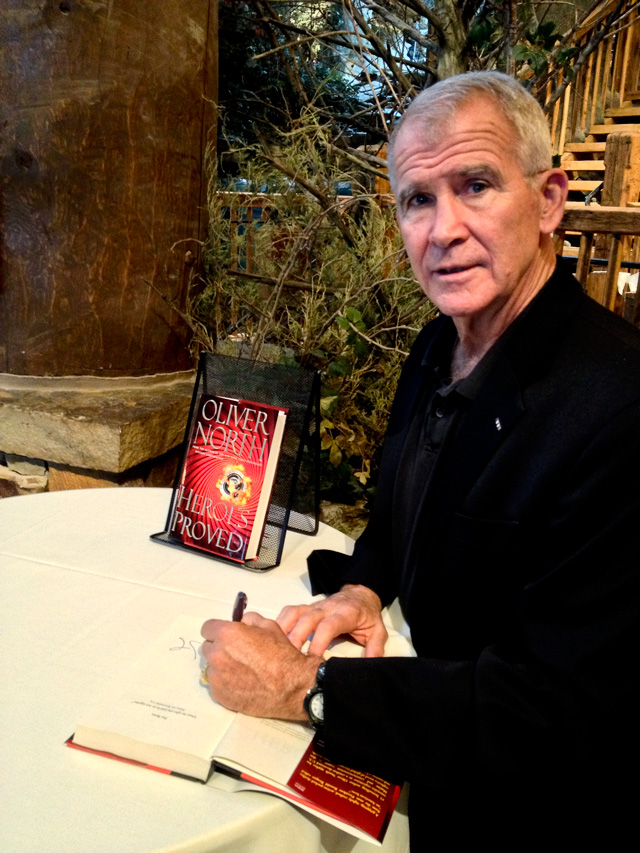 It’s the year 2032 and the president claims America is now safe from terror. We’re told Iranian nuclear weapons no longer menace our citizens. Leaders in Washington insist that United Nations treaties and innovative technologies can protect us and assure peace in our time. To save money, “Progressives,” holding power in our capital, have cut the U.S. Armed Forces to the bone.

But when the city of Houston is targeted by suicide bombers – and Dr. Martin Cohen, America’s foremost physicist is kidnapped – the brilliantly executed attack sends shock waves around the globe. The price of fuel skyrockets. With the U.S. economy on the brink of catastrophe, leaders in Washington look for a scapegoat – instead of our missing scientist.

Enter Peter Newman, a highly decorated U.S. Marine war hero, veteran of multiple high-risk covert operations – and Naval Academy roommate of Dr. Marty Cohen. The precarious quest to find and rescue his friend puts the entire Newman family in lethal peril – and exposes the most ominous threat to the United States in our nation’s history.

Only someone who has actually “been there – done that” could write this book. Filled with heart-stopping action, authentic detail, and blistering tension, Heroes Proved is the most riveting work yet from national security expert, master novelist, and real-life war hero, Oliver North.

"Oliver North is one of our nation's heroes. Heroes Proved reflects his experience and understanding of what it takes to protect our way of life and preserve our constitution. It's inpsiring truth in the form of a novel. Don't plan to sleep until you finish--because you can't put it down. Bless you, Ollie, for writing this."

"This is a heart-thumping 'must read' for every American who cares about the threats we face and where we're headed. Oliver North knows heroes, the challenges they face, and the sacrifices they make. He says Heroes Proved is a novel. I say it's a wake-up call--a warning shot across the bow of complacency!"

--Sean Hannity, host of The Sean Hannity Show on radio and Hannity on FOX News Channel

Oliver North is a combat-decorated Marine, the recipient of the Silver Star, the Bronze Star for valor, and two Purple Hearts for wounds in action. From 1983 to 1986 he served as the U.S. government’s counter-terrorism coordinator on the National Security Council staff. President Ronald Reagan described him as “an American hero.” A New York Times bestselling author, syndicated columnist, and host of the award-winning War Stories documentary series on the FOX News Channel, North lives with his wife, Betsy, in Virginia. They have four children and twelve grandchildren.